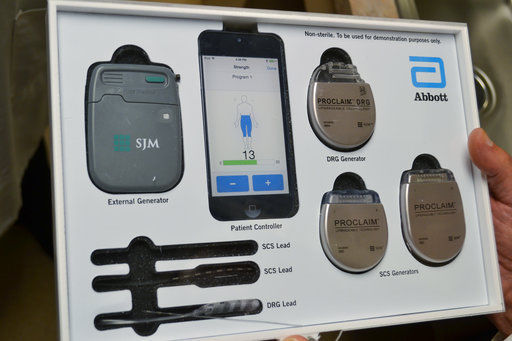 For years, doctors and medical companies have aggressively pushed spinal stimulators “as a safe antidote to the deadly opioid crisis in the U.S. and as a treatment for an aging population in need of chronic pain relief.” (The Washington Post)

“Spinal stimulators are complex devices that send electrical currents through wires placed along the spine, using a battery implanted under the skin. An external remote controls the device.” (Fox4dc.com)

Doctors who have surgically implanted these devices say they have helped reduce pain in many of their patients. Medical device manufacturers insist the devices are safe.

Pete Corby, a movie stuntman who injured his back working, said a spinal-cord stimulator decreased his constant pain, and helped him get off the opioids he had become dependent on. Corby said the stimulator alleviated up to three-quarters of his pain, and literally saved his life.

However, Associated Press investigators found that spinal stimulators are more dangerous than many patients know. “They account for the third-highest number of medical device injury reports to the U.S. Food and Drug Administration, with more than 80,000 incidents flagged since 2008.” Patient reports range from being shocked or burned to having suffered spinal-cord nerve damage

The FDA reports more than 500 people with spinal stimulators have died, but there aren’t enough details to say for sure if the deaths were related to the stimulator or implant surgery.

The AP searched an online forum and found 40 patients who said they had problems with spinal-cord stimulators. In interviewing these 40 patients, the AP found that twenty-eight of the forty “said their spinal-cord stimulators not only failed to alleviate pain but left them worse off than before their surgeries.” More than half of the patients said they felt pressured to get stimulators for fear their doctor would cut off the only thing that was helping them – pain medicine.

Insurance companies, Medicare and Medicaid consider spinal stimulators a “last resort” treatment. A doctor must show that conservative treatments did not work. Patients also have to “undergo psychological assessments to evaluate the likelihood of success.” After these assessments, if the doctor feels as if a spinal stimulator will help they will insert thin electrodes under the skin for a trial period of three days to a week. If the external transmitter gives the patient relief, a permanent stimulator will be implanted.

45-year old Jim Taft, who lives in West Columbia, South Carolina, had a successful three-day trial with the stimulator in 2014. In April of 2014, Jason Highsmith, a neurosurgeon in Charleston, SC implanted the Boston Scientific’s Precision stimulator.

Taft had been seeing a pain management doctor for five years, due to his right arm being crushed in his work at an architectural engineering company. Taft says that every time he walked into the doctor’s office, he would notice the spinal-cord stimulator brochures, showing pictures of people biking, swimming and fishing.

The doctor talked to him about getting one of the devices. Taft wasn’t sure, but felt backed into a corner, since he was on so many painkillers. When the doctor told him that the stimulators had improved the quality of life for other patients, and told him that he would be able to wean off of his pain medicine, Taft was finally swayed.

According to hundreds of pages of medical records, Taft had problems with the device as soon as it was implanted. It was randomly shocking him and the battery burned his skin. Taft and his wife immediately started complaining, but his doctors and a Boston Scientific representative told them that spinal-cord stimulators don’t cause the kinds of issues he was having.

However, Boston Scientific’s own literature says that “spinal stimulators and the procedures to implant them carry risks, such as the leads moving, overstimulation, paralysis and infections.”

Taft says had he known that so many people had experienced problems with the device, he would have reconsidered getting one. He said that Boston Scientific even reprogrammed his device, which resulted in no improvement.

After telling them it felt like the lead was moving up and down his spine, they said, “It can’t move.” In July of 2014, x-rays showed that it had indeed moved by two inches.

Dr. Highsmith reported to the AP that the electrode broke due to “vigorous activity” by Taft. Taft says that’s not possible since he was in such bad shape after the surgery, and was not able to do anything vigorous.

In October, Dr. Highsmith did surgery to install a new lead, tested the battery, then reinserted it. Taft continued to have numbness, tingling and pain. In his medical records notes, a physician assistant wrote that the device “seemed to make his pain worse.”

The stimulator was removed in August of 2015. In June of 2016, Taft went to a spine clinic, which said that he had “significant axial and low back pain due to implantation and explantation” of the device.

Taft is only one of many patients who has experienced problems with the spinal-cord stimulator, after having the false hope that his life was about to change for the better.

This proves that although you should trust your doctor, you need to do research as well, and make sure you find out everything you can about any procedure or surgery your doctor advises you to have.

Taft is now a prisoner in his own bed. He can hardly get up to go to the bathroom on his own.

He said, “This is my death sentence.”

Other online references used for this article: